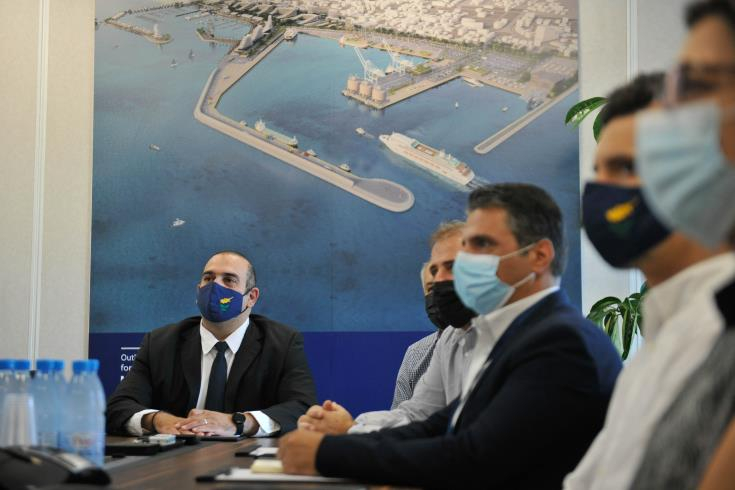 Karousos said Larnaca and the country would benefit from the investment, as thousands of jobs will be created, and billions will flow into state coffers.

The Master Plan will be presented to various departments before the port, and the marina is handed over officially to the consortium on 1 April 2022.

The minister said the project, essentially privatizing the Larnaca port and marina, is a “milestone”, which will bring about a significant upgrade to the area but pressure Limassol port to up its game.

Karousos said the port’s environmental footprint would be next to zero, as production of pollutant emissions will be minimal.

Panos Alexandrou, CEO of Kition Ocean Holdings, expressed satisfaction with “the perfect and flawless cooperation that we have so far, both with the government, the President and ministries who have given direct instructions to services”.

“Several estimates have been made; it is a project that will take about 12-13 years to build.

“It is estimated that the project will generate for the Republic revenues of around €12 bln in the long run.

“There will be about 4,000 new jobs created, calculating those directly tied to our company and those created by companies such as restaurants that will open outlets at the commercial part of the project”.

Alexandrou said priority would be given to locals from Larnaca and Cypriots in general.

Asked when the project will be taking off, Alexandrou said that “the project will start to take shape in mid-2022, when the bulldozers are entering the marina, carrying out the necessary demolition works”.

The work will be carried out in four phases over 15 years.

The BOT project will see the government receiving fixed rent, and a percentage of the revenue through a concession agreement with the port/marina operated on a 40-year lease and the real estate is acquired on a 125-year lease.

After 40 years, the port and marina can be handed back to the government, deciding on their management.

Also, the works include the expansion and reconstruction of the existing marina to accommodate 650 boats from 5 to 150 metres long and offer facilities such as boat repair and services.

The upgraded marina will also accommodate mega yachts up to 150m.

An upgraded Larnaca port will accommodate ships up to 450 metres in length, such as luxury cruise ships, energy exploration vessels, military, and other merchant ships.

During the first phase, an ultra-modern passenger terminal will be constructed to serve large cruise ships, which can now include Larnaca.

Completion of the project follows three phases of construction, including luxury villas, imposing residential buildings with 360-degree unobstructed views, office buildings, a shopping area with restaurants and a traditional market.

A Medical School will co-exist next to a Medical Centre, a Hotel and Hospitality College and a Blue Marine, Environmental and Energy University.